Finding strength and solidarity in the face of the coronavirus pandemic.

The coronavirus pandemic has wreaked havoc in every sector of society. However, it is in the closely-knit downtown core of large urban centers that fabric of daily life has become even more exacerbated.

In Toronto’s downtown east side neighbourhood of Moss Park, a community typically described as occupying east of Jarvis Street to Parliament street, and south of Queen street to Dundas street, coping with the pandemic has been particularly challenging. This is because Moss Park not only comprises of public housing complexes, but also a number of low-income rental units, rooming houses and several homeless shelters all of which contribute to the housing needs of the city’s most vulnerable people, including a significant population of people struggling with poverty, addictions and mental health.

For those living in poverty and struggling with mental health and addictions, finding the support to negotiate these circumstances maybe difficult at the best of times, but with a pandemic all around, life has become lot more challenging. Started as a tent run by volunteers, the Moss Park Overdose Prevention Site as been operating since August 2017 in an effort to prevent a rash of overdose deaths largely from fentanyl and contaminated drugs. At the Moss Park site people can use drugs under the supervision of a staff or volunteer who checks for signs of overdose and infection. They also monitor those using drugs and offer clean supplies. 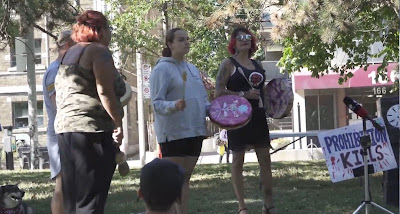 The Moss Park Overdose Prevention site is just a small part of the needed response to the crisis.

In Toronto the stream of overdose victims (27 suspected fatal opioid overdoses – reported by CBC Aug 21, 2020) has reached its own pandemic proportions. In response there have been a number Government investments in Overdose Prevention Sites (OPS) beginning in 2017, and safe injection sites, and most recently the first safe drug supply program. The safe drug supply is an initiative intended to circumvent the influx of tainted street drugs that are causing the current raft of overdoses. Part of a wider view on the issue of illicit drug use, the safe drug supply program is an extension of the harm reduction approach, which seeks to reduce the harms associated with the criminalization of drug use.

The notion of providing officially sanctioned drugs to existing of drug uses is deeply contentious on all sides of the argument. Historically, the therapeutic ingestion of various substances (drugs like marijuana, opium, and other hallucinogenic) has a long history with humankind, and certainly along the way it has also been a problematic one for many societies. However, it is not until the modern era that we have an escalation of the domestic consumption of (illicit) narcotics and stimulants. Decoupled as it were from religious ritual and healing purposes, psychoactive substances and the addictions that have arisen from their use and abuse, have located the etiology of addiction within a set of debates that struggles to rationalize whether or not to view the dilemma as a ‘sin’ or ‘disease?’ Is it that the individual is to blame because of some moral or psychological deficiency, or is society to blame because it lacks the requisite foundation to support a healthy and positive environment for all its citizens?

So while this latest attempt to reduce the harms associated with the criminalization of drug use is seen by some as a another step into societal ruin (by make more drugs available to more people), and others as a more humane alternative to the punitive philosophy of incarceration, there are still others who claim that the safe supply program does not do enough. At a recent event staged in Toronto’s Allen Gardens to commemorate the International Overdose Awareness Day, where various organizations such as Street Health, Council Fire Native Cultural Centre, and others gathered along with members of the community to bring awareness and show solidarity with people who are dealing with addictions and mental health issues, RPTV met with Sarah Elisabeth a member of the Toronto Harm Reduction Alliance.

In Sara’s opinion, the safe drug supply program has the wrong approach, “while providing pharmaceutical grade opioids, the drugs themselves are limited both in the substance that they offer, in the caseload that they can take on, and a lot of these programs are pilot programs, so they are not permanently funded. And so while they are definitely a step forward, they’re just a drop in the bucket to the solution for the overdose crisis. Another part of the solution would be decriminalization; because these programs are really centered around opioids and they don’t include other drugs that might be contaminated, or other people who use drugs need a safe supply as well, and so safe supply programs are great, but we need is decriminalization to kind of help across the board to ensure that everybody has access to a safe supply of drugs.”

Dimitrije is a staff member at FOCUS MEDIA ARTS CENTRE.

To watch the video check out the link below: