Toronto has a rich history of being a go-to shooting location for many television and film production companies. Some notable films shot here over the years include Good Will Hunting (1997), Billy Madison (1998), American Psycho (2000), and X-Men (2000).

Regent Park has also had its share of showcases in film. This article aims to review the general content of movie dramas and televisions shows shot in Regent and explore their relationship to the community.

Clement Virgo is a director, producer, and writer from Montego Bay, Jamaica. He was born in 1966 and moved to the Regent Park area in Toronto in 1977. During this time Regent Park was generally populated by low-income families and as a hot spot for drugs. Virgo is most recently known for his roles in Greenleaf (2016-2018), The Book of Negroes (2015), and The Wire (2002) as Director and/or Producer. His first feature-length film, however, was Rude (1995), which was filmed almost entirely in the old Regent Park. “The film told three separate storylines that were all connected by the voice of an underground radio disc jockey by the name of ‘Rude’ (Black in Canada).” Maxine, The General, and Jordan face problems within the community and find solutions to those problems. Interestingly, the character “Maxine” from Rude has a job as a window dresser, which was also an early job of Virgo’s. The film was nominated for numerous awards and was the first feature film shot by a Black Canadian filmmaker. Unfortunately, when the film was released commercially, it went unnoticed.

Narc (2002) follows an ex undercover narcotics officer as he tries to solve a murder case involving the death of a local police officer. The movie is set in Detroit, but was shot entirely in Toronto, specifically Regent Park and Liberty Village. This was shot before the recent revitalization, so many location scouts looked at the area as gritty and crime ridden. One of the most engaging and memorable scenes in the movie is a chase scene that showcases a large part of Regent Park and its residential community. Detroit has a history of crime and grittiness that was easily portrayed in the old Regent Park. Even though Detroit is a cheap shooting location, Toronto has held a better reputation in terms of production costs. 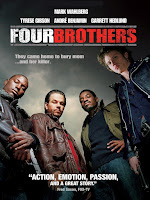 Four Brothers (2005) was also filmed around Regent Park before the revitalization. The film is about four adopted brothers from Detroit who try to find the individuals responsible for killing their mother during a robbery. Rude, Narc, and Four Brothers fall under the same film category of gang violence in crime-ridden areas. Regent Park was obviously a target for these types of films, but since the revitalization, television companies have explored other genres.

Kim’s Convenience (2016-present) has been a tremendous success in television over the years with a completely unorthodox theme for the revitalized community. The show follows the everyday experiences of a Korean-Canadian family running a local convenience store in Regent Park. The show started airing around the second and third phases of revitalization, but, rather than focusing on violence and crime, the show focused on racial dynamics in a comedic way. Kim's Convenience showcases many broad conversations about identity, place, and belonging, which are all frequent topics in the community due to its many intersections of race, class, and faith (Costello, 2016). This show continues to air and represent the community in a positive and constructive way for all to enjoy.