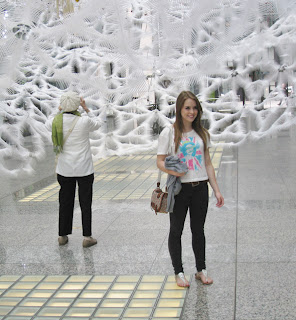 The Sargasso exhibit in the 2011 Luminato festival swallowed me like I was food. It reacted to my movement and seemed to acknowledge my presence. Vials containing cooking and olive oil, vinegars, and lemon juice hanged above, collecting toxins from the surroundings to transform and neutralize into a precipitate in the vial. Discrete speakers floated among the mesh-like body, emitting a subtle yet soothing melody. Balloon-like structures slowly inflated as I came under them, almost as if my movement was the oxygen for the lungs of this organism. Scent glands picked up material in the air and gained mass over time creating a soily mixture.

The question which Phillip Beesley, the chief architect of the Sargasso installation wanted to answer was a simple one: "Can architecture exhibit a sense of life?" After going through his piece, the answer to that question is definitely positive. The Sargasso structure is part of an evolving field called responsive architecture which attempts to have structures intelligently interact with their environments and change in response to them.

Is it possible of us to see an increase in architecture of this style in the near future? Only time will tell, but who wouldn't want to transform the dullness of a regular mall, school or office building into something as alive and interactive as Sargasso? I know I certainly would.
Posted by Focus Blogger at Monday, July 08, 2013 No comments:

Shuko Ebihara has started her career as an intern at IOM Helsinki participating the Culture Orientation project. From 2007, she has worked at the Japan Foundation as project officer where she has launched "Okubo Art Project" , an Art workshop targeted to the children and youth with migrant background. The workshop involved video-making, photography and contemporary art to provide children and youth an opportunity to feel their potential within. From 2012, the "Okubo Art Project" has developed to "Shinjuku Art Project" to conduct joint project with the Shinjuku-ward. Born in Japan, grew up in Peru and London, and lives in Japan.
Posted by Regent Park Focus at Monday, July 08, 2013 No comments: