Community-based policing is a proactive law enforcement strategy that focuses on building ties and working closely with a community’s members to create partnerships and plans for preventing and reducing crime. While community policing will look differently depending on the community it serves, a central feature is that the same officer patrols and works in the same area on a permanent basis. Currently there are 17 community-based police programs in the Greater Toronto Area (GTA), but what most people don’t know is that Toronto’s community policing started in Regent Park in May of 2017. We know this because the original officers involved in setting up the Regent Park community policing program continue to work here today. The officers are PC Mircea Biga, PC Farzad Ghotbi, and PC Edward Parks; the newest officer assigned to the Regent Park community is PC Nigel Thomas (who is replacing PC Melissa Huntley while she is on maternity leave).

Symptomatic of the increasing diversity of the Metropolitan Toronto Police force, Mircea Biga arrived in Toronto from Romania in 2004, and he joined the Toronto police force in 2007. Farza Ghotbi arrived to Canada from Iran at 13 years of age, and he joined the force in 2002. Both Mircea and Farza are proud of their work in Regent Park and see themselves both as public servants—taking directions from residents—and as community ambassadors. 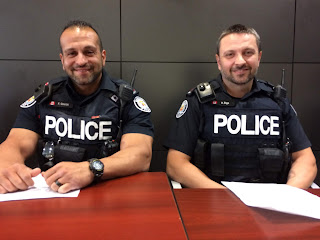 As community police officers, Farza and Mircea make an effort to attend all events and community-wide meetings involving residents, particularly meetings related to safety. They also regularly conduct classroom visits with local area schools and work closely with afterschool programs in the neighbourhood. In addition, their work includes coordinating police volunteer activities with youth, making time to meet with families of children involved with the justice system, regularly patrolling local “hot spots” for conflict, and responding to resident reports of criminal activities. All these activities can be summed up in three objectives: (1) engagement with the community, (2) programming, and (3) enforcement. This is why, according to the Toronto Police’s twitter account (June 2018), residents expect that neighbourhood officers should have training in the following: sensitivity, customer service, communications skills, mental health, cultural competencies, and human rights. In the words of Constable Mircea: “There is no such thing as a typical day in the life of a community police officer”.

As part of a new effort to outreach to the community about their work, the officers have added the role of television celebrities to their job. This is because Farza and Mircea are working with the Regent Park Focus Media Arts Centre on a television series called Meet Your Neighbourhood Police. The series, featuring conversations with Farza, Mircea, and others about policing in Regent Park, was launched before a community audience on June 21, 2018. The series is now available on Regent Park TV on Rogers channel 991 and on YouTube (Regent Park TV).

Do you have a question or an issue that you would like to see Farza and Mircea tackle in the next episode? If so, please contact Regentparkfocus@gmail.com.