Racism is not a new concept to racialized people, talk to almost any black teenager or black young adult resident of Regent Park and they’ll be able to tell you of their or their friend’s experiences of been stopped by police due to the colour of their skin, most often as part of Toronto Police Services TAVIS Program (Toronto Anti-Violence Intervention Strategy) for aggressive policing of Toronto’s low income neighbourhoods. In these encounters black individuals are carded and asked to confirm their Regent Park resident status or state the reason for visiting the area. The ten-year TAVIS program ended in 2016. 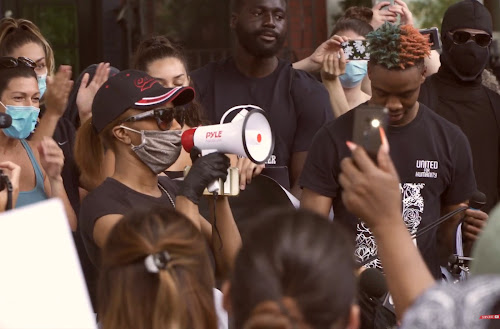 Regent Park is not alone, today most Black Canadians can also tell you of a negative experience they or someone close to them has had, due to the colour of their skin. Whether it is being unfairly targeted by the police, followed around in a store, being denied housing or employment, being over-looked on a dating site or passed over for a work promotion. Unfortunately for black people race plays a major role in how they are treated in society.

However, it wasn’t until the murder of George Floyd by the police that the whole world started paying closer attention to institutional racism. And although the issue is still being widely debated in America, after a few weeks of attention here Canada has once again mostly fallen quiet. Sure there were protests, credit to the black lives matter movement (BLM), and sure politicians did their song and dance but the truth of the matter is where racism in Canada is concerned it is all to often done politely behind closed doors. As Canadians we often look at America and think thank god that’s not happening here, but in fact it is happening here and Canada should not be pretending to be so high and mighty.

This is not the first time the BLM has been in the media. Many Canadian readers will remember the last time BLM was in the headlines was in 2016 when they delayed the start of Toronto Pride parade by having a sit in to protest the treatment of black people by police and the role police had in the parade. Although many have now come out in support of BLM, back in 2016 it was a different story. People were not so charitable with many stating that BLM were being too confrontational and encroaching on an area they had no right in. I guess at that time they forgot that black LGBTQA members existed.

Still the message voiced by the BLM has always been the same. The treatment of black members of society, and likewise Indigenous peoples, by the police are rooted in racism. Indeed, there have been many studies done to support this belief. The most recent one, done by the Ontario Human Rights Commission (OHRC), just came out this month and it has some damning statistics. It found that a black person in Toronto is nearly 20 times more likely than a white person to be shot and killed by the police. Even in less serious cases the story is concerning. For example, the OHRC reports that black Torontonians represented 37.6% of people charged with cannabis possession even though they make up just 8.8% of the population and studies have shown they use marihuana at similar rates to white people. This mistreatment is not exclusive to black Canadians however. Indigenous people suffer at the hands of police in Canada as well. A study done by Pivot Legal looked at the last 17 years of police violence from 2000 -2017 and found that although the indigenous population in Canada is 4.8% they make up 15% of total fatalities cause by the police.

But can anything be done? Well if you listen to those voices behind the BLM movement you will know that yes there are actions that can be taken to uproot the system of racism in the police. BLM has been calling to defund the police and, although this might seem radical to many there is no denying that now is the time for decisice action. According to BLM - Defund the Police Canadian “taxpayers spend 41million a day on police services across the country”. By defunding the police, scholars argue, that the money could be funnelled into areas that are in desperate need of support and would help address social inequalities. For example, CBC reported that “70% of victims [of police violence] suffer from mental health and substance abuse problems”. Instead of so much of our money going to the police, we could be funding sectors that assist people with mental illness putting the emphasis on helping rather than harming. And defunding is not an unattainable dream – just look at Seattle where the city council recently voted to significantly cut their police budget so they can divert dollars into social programs.

Unfortunately, because Canada has yet to confront its problem with racism, the Defund the Police movement by BLM has been ignored by our political leaders. A recent vote at Toronto City Council on a motion to cut the police budget was defeated, with councillors being unwilling to cut the police budget by even a mere 10% leaving many black and indigenous people to wonder if the racism they face in Canada is really any better than in America.

Watch video in link below:
https://youtu.be/4kzhOxwvtZI

(Adaku is a volunteer journalist with the FOCUS Media Arts Centre)