As of Monday July 28th, 2020, the city of Toronto has entered stage 2 of phase 3 of the Covid-19 pandemic recovery. Despite the ease of restrictions, encampments continue to be a concern.

Encampments are outdoor tent dwellings and makeshift shelters that are present in various parks and green spaces across the city, including in and around the Regent Park and Moss Park area. Many of the inhabitants are homeless.

Acknowledging the lack of shelters to safely house the homeless during the Covid-19 pandemic, in an effort to prevent and deter encampments, the City of Toronto has acquired hotels and buildings, in order to provide temporal housing to encamping individuals. 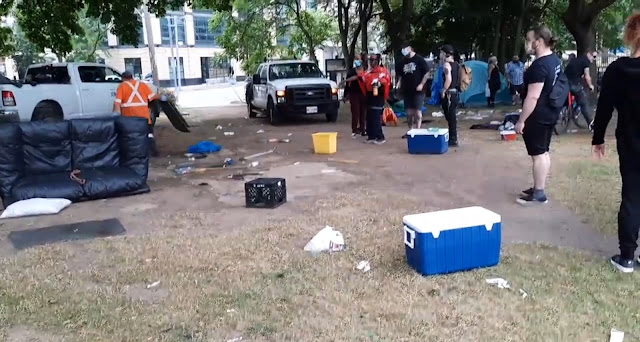 “Clearing encampments is a multidisciplinary effort with staff from Parks, Forestry & Recreation, Transportation Services, Solid Waste Management Services, and Shelter, Support & Housing Administration, and where appropriate, there is support from the Toronto Police Service to ensure the safety of all.”

Furthermore, the city claims that:

“As of today [July 14th, 2020] over 300 individuals have been moved from encampments to appropriate indoor spaces, including shelter, respite, hotels and interim housing.  Subsequent to the individuals being moved, the encampments are cleared of waste and debris. Our priority is getting people safely inside.”

Many argue however, that the reality on the streets is quite different and the City, with enforcement by police services, has been clearing encampments prior to individual(s) being moved to safe housing.

Sanctuary Toronto is a church that serves marginalized people in Toronto’s downtown core. Sanctuary operates out of 25 Charles Street (in the Bloor and Church area). Greg Cook, a staff member of Sanctuary expressed his concerns with removal of the encampments and challenged the City’s motivations behind removing them.

According to Greg, people live in encampments because they feel safer then living in the City’s crowded shelter system. Furthermore, the inhabitants of encampments far exceed the City’s capacity to provide safe homeless shelters or temporary hotels. If this is the case, why are they removing the encampments?

According to Greg, the clearing of these encampments has less to do with the safety of the inhabitants and more to do with the implementation of the Broken Window Theory.

“The broken windows theory,” says Greg, “is a criminological theory that states that visible signs of crime, anti-social behavior, and civil disorder create an urban environment that encourages further crime and disorder, including serious crimes. The theory suggests that policing methods that target minor crimes such as vandalism, loitering, public drinking, jaywalking and fare evasion help to create an atmosphere of order and lawfulness, thereby preventing more serious crimes”.

The theory was introduced in a 1982 article by social scientists James Q. Wilson and George L. Kelling. It was further popularized in the 1990s by New York City police commissioner William Bratton and Mayor Rudy Giuliani, whose policing policies were influenced by the theory.” (Wikipedia, July 14th, 2020)

Cook argues that the Broken Windows theory is really what is behind the removal of the encampments.

Backing up his claim, Greg states that, “Within the homeless shelter system, over 600 people have tested positive for Covid- 19.” Greg compares this with testing of encampments where there has been almost no outbreak of Covid that he has been aware of. Although the city does not do widespread testing among encampments, covid-19 testing of encampments at Moss Park and at the Sanctuary are evidence that encampments are far safer to live in then City is willing to admit.

Sanctuary, Greg informs us, is one of many advocate groups that are currently pursuing ligation against the City over safety in the homeless shelter system.

To hear more about the removal of Encampments from Greg Cook please see this video.