ENCAMPMENTS AND THE HOMELESS COMMUNITY

The COVID-19 pandemic has wreaked unprecedented upheaval across the globe. Millions have tested positive, and hundreds of thousands have died. In more than the 200 countries in the world that coronavirus has taken hold, health systems have been devastated, unemployment is rampant, and populations have been in self-isolating lockdowns for months on end. And while our scientists desperately search for vaccines and improvements to testing, there is another dimension to the pandemic that is emerging; it is the staggering realization that disproportionately the most vulnerable are the hardest hit – the poor, the elderly, the marginalised, and those in low income but vital jobs.

In Downtown Toronto East including the areas of Regent Park, Sherbourne-Dundas, Moss Park, Cabbagetown, St. Jamestown and the Church and Wellesley neighbourhood where many of the most vulnerable members of our society live, there is a crisis brewing. Homeless encampments are springing up everywhere leading to conflicts between residents and property owners on one side and homeless people on the other. 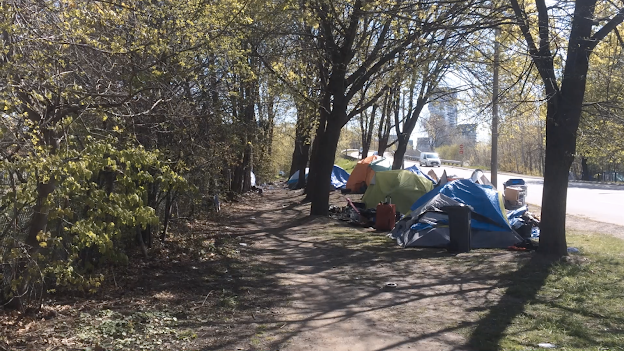 In this conflict poverty advocates believe that homeless people are once more being victimized for being poor. Supported by academic literature, poverty advocates believe this is structural –it stems from a fundamental belief in society that the state of poverty is caused by the poor themselves through their laziness and lack of willpower. Subsequently, the rest of society is absolved of any further responsibilities - the poor get what they deserve.
As a result of lack of action to significantly reduce poverty, the homeless who are literally without a means to shelter, are being forced to seek out their own solutions.  These solutions often put them at odds with mainstream society. In the midst of Covid-19, their solution to safe shelters is “encampments”. In vacant lots, under bridges and expressways, in ravines, and sometimes in the doorways of stores, homeless people are setting tents and makeshift shelters.

Encampments brings into question of whether or not homeless people have a right to resolve their state of homelessness on their own, without the intervention of governments and their agents? The answer is nestled in society’s relationship to property, its monetary value, and the privileges that come with ownership, and in Toronto that answer is NO!
Toronto area resident groups and home owners who argue against the presence of homeless encampments point to: the lack of proper hygiene and sanitation that can result in the spreading of infectious diseases; the risk of park fires due to illegal outdoor cooking; trash including mattresses, tarps, blankets, beer cans and bottles; increased drug use; intimidation; and property damage. 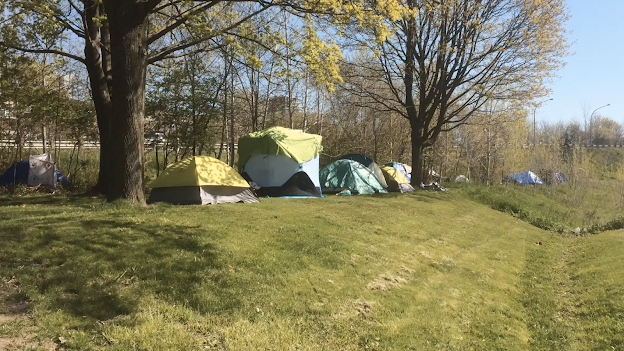 In Toronto, “anti-camping” laws exist that effectively target and criminalize the homeless for what is an act of basic survival. Police regularly dismantle homeless encampments and fines can be imposed on those caught sheltering in public spaces, leading to further involvement in the criminal justice system when, for instance, a person is unable to pay that fine.

In her submission to the United Nation’s COMMITTEE ON ECONOMIC, SOCIAL AND CULTURAL RIGHTS (CESCR), DJ Larkin, a Canadian housing justice lawyer, requested that: “Canada honour these commitments: recognize a justiciable right to housing, recognize social condition, including homelessness, as a protected ground against discrimination, recognize the right of homeless people to an adequate standard of living and health, revoke anti-camping laws that criminalize and discriminate against homeless people for engaging in behaviour necessary for survival, and ensure that subnational governments are aware of their obligations under the Covenant and have the knowledge and resources required to respond to the needs of homeless people in their communities.”

Considering crowding at Toronto homeless shelters and lack of affordable housing, many homeless advocates feel that outdoor encampments can temporarily serve to keep homeless people safe during the Coronavirus Pandemic. They argue for the City provision of public health staff, garbage services, regular food and water supplies and nearby access to washrooms and showers.

In an effort to find a middle ground between homeowners and the homeless, the City of Toronto through its City’s Shelter, Support and Housing Administration (SSHA), has taken another approach: “we paused encampment clearings, and shifted focus to the safety of those in encampments and living outdoors the City will increase outreach programs, provide access to safe indoor space, shelter and housing, increase education and infection programs, and expand harm reduction and encampment health and safety. Along with these supportive measures the City has not given up on dismantling the encampments, and in that regard the City has deployed multiple enforcement team to clean and clear encampments, as of May 25, 2020, 169 individuals have been moved from encampments to safer spaces inside (153 into interim housing, 10 into hotel rooms, 6 into shelter spaces).  As a result 15 encampments have been cleared.”

Homeless advocates and residents of the encampments however think this two-pronged approach is disingenuous. On one hand the City says they are supporting the homeless, while on the other hand the City continues to dismantle the encampments.  The City for their part feels that this balanced approach is the best way to support the needs of the homeless.

For more issues about the Encampment issues view this interview with Kathleen Smith from Sanctuary Toronto, a drop-in centre for street and homeless people.


by Dimitrije Martinovic with contribution by Adonis Huggins
Dimitrije and Adonis are staff members of FOCUS MEDIA ARTS CENTRE.