Regent Park is home to approximately 12,000 people. Many of the residents are of the Islamic faith and have reported encountering Islamophophia in Toronto and even in their home community of Regent Park.

As of 2020, Islam has 1.9 billion followers making up about 24% of the world population. There are almost as many Muslims as there are Christians in the world who make up about 29% of the world population. With such a large following, you would expect there would be little to no misconceptions among the Western public about the Islamic community. Unfortunately, this is not the case and Islamophobia in North America is widespread. I invited Imam Said Rageah of the Sakinah Community Center to have a conversation about the public misconceptions of Islam and how we can better educate the people about Islam.

Islamophobia is described as the illogical fear, hatred, and prejudice towards Islam and its followers (Muslims). These prejudice and fears are often caused by misconceptions about the Islamic community. According to Iman Said Rageah, there are three common misconceptions of Islam.

The first misconception that Imam Said Rageah helps us break down is the belief that all Muslims are the same. Iman Said explains that this is completely false because Muslims come from all over the world and their cultures and customs vary from region to region. Similar to Christianity where there is differences between the different denominations (Catholic, Protestants, Baptists, etc), there will be differences between how Islam is practiced not only in different countries but also among different sects or branches.

The second misconception, often promoted by the Western media, is that Muslims are terrorists. This is completely false. Iman Said points out that there are 1.9 billion Muslims in the world and if they were all terrorists, we would not have this Earth to call our home. Also, whenever people talk about Muslims they often mix them up with extremists. Iman Said explains that extremists are present in small parts of the middle east and Africa, and they terrorize everyone’s lives including Muslims! Unfortunately, according to Said, this perception has led to racial profiling, discrimination and even terrorism against Muslims here in North America. He points to the banning of the US travel ban on Muslims entering United States, the Quebec City mosque shooting and the recent Quebec law banning religious symbols which was really targeted at Muslims.

The third misconception about the Islamic community is that Muslims are intolerant towards women and that women are forced to wear Hijabs. Iman Said explains that this is a common misconception about the Islamic community which is completely false, and informs us that there is a significant population of Muslim women who do not wear a Hijab (headscarf). Said argues that for a great majority of women, wearing a Hijab is a choice and it is a way of expressing their faith. For those that argue that Islam is a religious that oppresses women, Said points to whole chapters in the Quran that are expressively dedicated to women and how they are to be treated – which is with respect, equal rights and equal access to education. Said argues, “If Islam was such an oppressive religion, why would so many women remain followers? Would you stay in a religion that oppressive you?”.

After we debunked these misconceptions, we talked about how people can be better informed about Islam. Imam Said agreed with me that more efforts are needed to create places where people of different faiths could come together. This is important because meeting different people breaks down stereotypes and fosters discussions. He also advocated for the need to teach Islam in public schools as part of religious or social studies. We also need to continue debunking and clarifying things that we hear from the media and others around us that are not true. One way that media can combat misinformation is by hiring journalists who are Muslims. 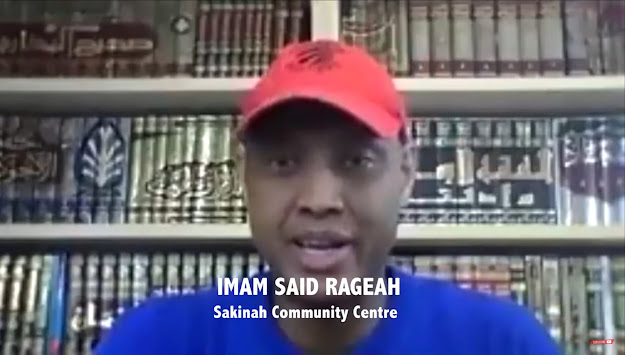 In conclusion, this talk was very informative and insightful. If you are interested in learning more about these issues watch the video interview with Imam Said Rageah, I highly recommend it. You could also share it with a friend or family member who might need some debunking of their own misconceptions. Remember misconceptions form the basis of Islamophobia, and it hurts people on the receiving end.

By Jameila Parnell with contributions from Adonis Huggins

(Jameila is a student journalist with the FOCUS Media Arts Centre).
Posted by Regent Park Focus at Thursday, July 23, 2020