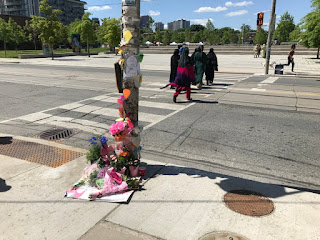 In Toronto there are around 3,000 laneways running throughout the city. Despite this only about
10% of these lanes are named. There are many reasons why naming of lanes can have many
positive impacts on the surrounding neighbourhoods. As the Laneway Project highlighted, providing a name for a laneway can help emergency services reach the scene of emergency, preserve the history of an area, create a sense of place and identity, and bring the community together through the naming process.
On June 20th 2019, Ismathara Ratna was struck by an impaired driver in the Regent Park community. The mother of three, was beloved by friends and family members in the community and many residents were devastated to hear the news of her passing. It was shortly after 1pm on a Thursday when Ratna, on her way to visit a friend after dropping her kids off at school, was struck by the impaired driver who lost control of his vehicle and mounted the sidewalk where Ratna was standing.
This tragic death has left the Regent Park community reeling and looking for ways to
memorialize her. With the current revitalization plans of the community, came an opportunity to
honour her legacy.
Just south of 150 River St. and north of Dundas between River and Sumach Street, sits a newly
created, yet unnamed laneway. Although the naming of a laneway can be purely ceremonial this
particular lane is a living laneway meaning it will have entrances to amenities such as offices
spaces, live work spaces and an outdoor public space. For this reason, the naming of this lane is
of particular importance.
As Shawn Major, the revitalization manager for Regent Park explains “in this case because
buildings will have addresses and have access off the laneway, they need to have names”.
The process of naming this particular laneway was initiated in the summer of 2019 by Toronto
Community Housing Corporation (TCHC) and the Daniels Corporation. As explained by Major,
the first step in the process was going out to different community events to hear from residents to
get ideas for names as well as mailing a survey out to all Regent Park residences encouraging
them to submit name suggestions. Those suggestions were then collected and, with the help of
the revitalization working group (a group of residence that help support the revitalization project
and engagement in the community), narrowed down to a smaller list. These names were then be
voted on through a community update meeting, and once voted on would go on to Toronto City
Council for final approval.
It was during the first stages of the laneway naming project that Ratna was involved in the fatal
hit and run. The family of Ismathara Ratna then approached TCHC and submitted her name as a
submission for the laneway name. The final names to be voted on in the community update
meeting were Phoenix Lane, Viola Desmond Lane, Tkaranto Lane, Freedom Lane, and Ratna
Lane. The ballots of the meeting were counted last month and as evidence of the significant
impact Ismathara Ratna had on her community, Ratna Lane was chosen by an overwhelming
majority.
​
There are however still some challenges to be faced with this selection. The City of Toronto’s
Street Naming Policy requires that when naming a street after a “recent event or recently
deceased individual...[it may only] be considered after two years” of the passing or event.
Although this is ongoing process and has yet to be approved by the Toronto City Council, there
is hope that this requirement will be overridden and Ratna Lane will be approved because of the
community support behind the name and the work of Ratna’s family. When this approval will
happen is still up in the air as Canada and Toronto deal with Covid-19. It is believed that the
Toronto City Councillors, who only just held their first meeting virtually last month, are focused
on Covid-19 emergency response issues first and fore most at this time.
In this video we interview Shawn Major and get in-depth information about the process behind
the Regent Park laneway naming process and the community involvement that went into the
project.
By Adaku Huggins-Warner
Adaku is a volunteer with the Focus Media Arts Centre