In the world of comics, keeping alive the past is just as important as making way for the new.

The Canada Comics Open Library (CCOL), located in Regent Park in the Centre for Social Innovation (CSI), at the Daniels Spectrum building, is a novel undertaking combining both traditional and innovative approaches to comics, their presentation, preservation, and promotion. In the world of comics, keeping alive the past is just as important as making way for the new. While the past may have been characterised by male dominated worldview, the present and the future are anything but that.

In what is commonly known as the Golden Age of comics (the 1930s and 1940s in the US), a pantheon of superheroes Superman, Batman, Spiderman, Captain America, and Wonder Woman, is conjured up to save the lot of mankind, from say, the devastation of the Great Depression. Parallel to this, and no less important, in Europe and in Japan for instance, comics are also flourishing, TinTin, Asterix, Manga and Anime emerge as groundbreaking examples of storytelling and world making - reshaping the very essence of what the comic strip can be.

Rotem Anna Diamant, the President and Librarian of CCOL, explains that today comics are framed by inclusivity, incorporating the work of Black, Indigenous and People of Color, LGBTQ+, and other marginalized comic creators, stories, and art. Comics today, nurture the participation of all ages and do not disciminate on the basis of formal skills. The CCOL acts both as a repository (housing a collection) of comic books, and as an educational and training centre. The library, has established a progressive and innovative workplace, working with open source software, a malleable cataloguing and call number system, mindful of subject displays with book facings to promote intersectionality, and knowledgeable reference services. 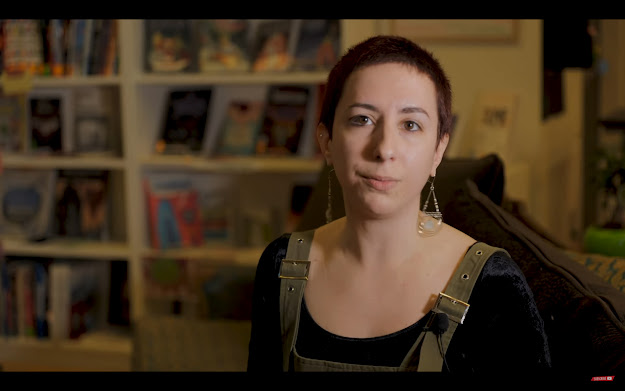 Promoting this new inclusive and expanded vision of what comics can be through education and locating the CCOL project in Regent Park, an area of Toronto that is culturally diverse– has the potential of reaching a much broader following and impact.

In this video, RPTV interviewed Rotem Anna Diamant, the President and Librarian, and Jordan Reg. Aelick, a resident comics creator, about the library and the work they do. Rotem and Jordan are both involved in the creation of comics as illustrators and authors.

(Dimitrije is a staff journalist of the FOCUS Media Arts Centre)