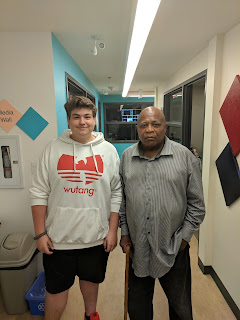 Regent Park is comprised of multiple populations from countries outside of Canada, such as Bangladesh, Somalia, China, and Vietnam. But in Regent Park, there is a small community that is often left off people’s radar: the French African community, which includes newcomers from Cameroon, Chad, Mali, and the Cote d'Ivoire.

About 2% of the Regent Park population speaks French as their first and primary language (City of Toronto statistics, 2014), which equates to 240 unique persons. Maybe that doesn't seem large, but for a neighborhood in Toronto, which is Canada’s most populous urban city, it’s larger than the city average of 0.1 (Social Planning Toronto, 2018)!

To support the social, cultural and economic inclusion of the smaller French-speaking population, there are some local organizations that exist, including the Centre Communautaire des Africains Francophone. This small community group was founded by a local Regent Park resident, Mr. Christian “George” Yombo, in 2002 in response to local gun violence. Yombo and other teachers help the young Africains Francophone of Regent Park each evening (Mondays through Thursdays) with their French or English homework. This after-school program was established to motivate the youth to continue going to school. According to Yombo, approximately thirty children and six teachers were engaged in the past. Yombo also said that he would love to continue this service; however, as it depended on volunteers, the capacity was barely there to support purchasing chocolate bars and snacks for youth incentives.

So who is Mr. Christian “George” Yombo? Originally from Cameroon, he immigrated to Canada at the age of 25. He knows upwards of thirty Regent Park families who speak French everyday as their primary home language, but they do not speak it outside of the home because barriers of access and inclusion still exist in Toronto for Francophone speakers, despite it being a federally-recognized official language.

However, while grassroots community groups can assist the French speaker with critical needs such as employment, health care, child-minding, immigrant services, and educational supports, Yombo was asked how the French language could benefit Torontonians. He replied that knowing the country’s other official language can position job-seekers for well-compensated federal government positions, entrepreneurial translation services, and careers in aviation among other opportunities.

As part of the efforts to increase the group’s visibility, the Centre Communautaire des Africains Francophone has partnered with Regent Park Focus to produce a weekly Francophone radio show, which airs every Sunday on Radio Regent.