Fire at Daniels Spectrum – Was it Arson? 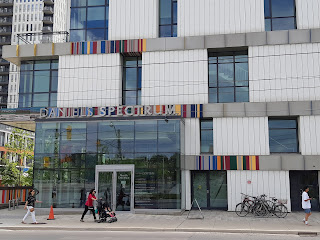 On the morning of May 30, 2018, a fire broke out at the Daniels Spectrum, located at 585 Dundas Street East. Although the fire was quickly extinguished, the emergency sprinkler system continued long after the fire was out, which caused flooding and extensive damage to the first and second floor.

It’s unclear how the fire started. “We were told that the fire started in the store room across the hall from ArtHeart” said Tim Svirklys, Manager of ArtHeart – a tenant arts organization located on the second floor.

Several people associated with the Spectrum believe the cause of the fire was arson. However, according to Artscape’s Chief Operating Officer, LoriAnn Girvan, the local fire and police departments are still investigating the incident to determine the cause. “We may never know, and it’s really important people don’t speculate. We are just moving forward,” said Girvan.

The fire has affected almost all of the first and second floor tenant agencies, forcing ArtHeart, Regent Park School of Music, Native Earth Performing Arts, Regent Park Film Festival, Pathways for Education, and the Show Love Café to suspend or move their summer programming activities. Additionally, many of the groups and individuals that have rented the Spectrum’s Ada Slaight Hall in June and July have had to cancel or reschedule their events. Fortunately, the third floor tenants and offices located in the Centre for Social Innovation (CSI) space were not affected.

Repairs are well underway and the new Spectrum Community Hub Manager, Jermyn Creed, plans to have a reopening party in the first week of August.