FAREWELL TO THE PEARTREE

A neighbourhood Icon serving the Regent Park and Cabbagetown area closes its doors.

In what is known as the Toronto Downtown East, which spans from East of Yonge Street to the Don River, and South from Bloor Street, down to Front Street, includes a surprisingly large number of quite distinct Neighbourhoods, they include: Corktown, Distillery District, The St. Lawrence Market, the West Don Lands, Moss Park, Regent Park, The Garden District, Cabbagetown, St. Jamestown, and the Church-Wellesley Village. The essence of these neighbourhoods is a mix of past and evolving histories, of shifting demographics, and the ebb and flow of economies. 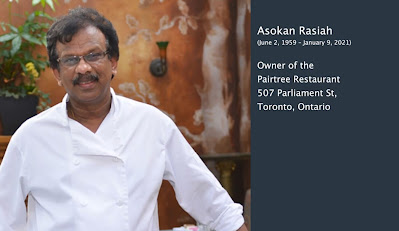 A major shopping and business thoroughfare of the Toronto Downtown East, Parliament St. has of course witnessed the rise and fall of its fortunes, from the site of the first Parliament Buildings of Upper Canada in the 1790s, to the redevelopment of Regent Park in the 1940’s and St. Jamestown in the 1960s, to the waves gentrification that begin in the 1980s – Parliament St. has seen it all.

The Peartree Restaurant, located at 507 Parliament Street in Toronto, was operated by Asokan Rasiah from 1993 until his death in 2021 due to COVID-19. The Peartree was the sort place that meshed with its surroundings, a blend of old-world charm and modern cuisine, it tapped into the diverse vibe of upper Parliament St.

For many years the Peartree was a favorite restaurant of choice for many who worked and lived in Regent Park and Cabbagetown area. From what customers, friends and colleagues have said about Asokan Rasiah, it is clear that Asokan embraced everything that Toronto and more specifically the diversity of the area had to offer. This is most apparent by a simple glance at the menu, which consisted of Canadian, Cajun, French, Italian, and vegetarian cuisines. The food was considered exquisite and prepared from scratch with creativity and enthusiasm - soups, sauces and dressings, steaks, fish, chicken, and with breads and pies baked on the premises.

In the 28 years of operating on Parliament Street, the Peartree Restaurant had become fussed with fabric of the neighbourhood. It was a place that people went to when they wanted mark a family event, go on a date, meet for lunch or just hang in the neighbourhood - and Asokan was their congenial host. As one person who knew him said, “I am so sorry to hear this news. I first met Asokan when we worked together at Poor Williams Restaurant in the 80’s and then as a guest at his much beloved restaurant for almost 30 years. I considered him to be a dear friend and will miss him greatly. He was a fine person, and the world is less bright. May God bless his soul and my condolences to his family.”

Time and time again the course of history has been shaped by multiple forces, by natural causes and by man-made causes. The old is ceaselessly replaced by the young and the new, and the present is but a flutter in the wind. We know nothing of the lives of the many people that once populated this area of Parliament St one hundred years ago. And likewise, in twenty years from now, when the building that once was the Peartree is a yet another condo, Starbucks or a pharmacy who will remember Asokan and his beloved restaurant. Perhaps no one…but then again, perhaps the older ones among us will remember a piece of Parliament Street that once had a little more charm.