Putting An End to Child Marriages

St. James Town, located in the heart of the City of Toronto, is a community of communities.

Officially, approximately 17,000 people live in the neighbourhood's 19 apartment towers and 4 low rise buildings, making it one of Canada's most densely populated communities. It is largely filled with immigrants — especially those who arrived in the 1990s.

Rowena oversees international policy and programs, advocating governments on policies that help children around the world. One of the issues that is dear to her heart is the rights of children and specifically advocating to eliminate child marriages.

According to Rowena, globally over twelve million girls under the age of 18 are entered into marriages each year, regularly to men who are significantly older. Rowena explains that this used to be much higher but over the last 25 years there has been a concerted effort to address this problem. Unfortunately, Covid -19 has exacerbated the problem due to the fact that girls have been forced to stay home and have been cut off from their education and social networks. Rowena is worried that there is a possibility that the world will lose the gains they made fighting this issue. 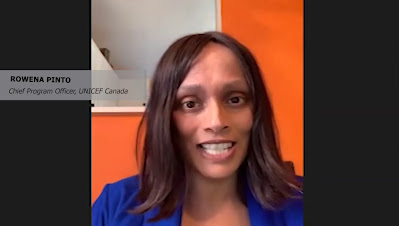 When a child is married under the age of 18, under the United Nations Convention of Human Rights and the Conventions of the Right of the Child, it is considered forced. There is no child that can make that decision on their own.

The impact for girls in child marriages is that they often are prevented from going to school and are put in more isolated conditions and as a result face a much higher risk of abuse and depression. The girls are also forced to engage in intercourse and have children before their bodies are mature and ready and as a result suffer health problems including infections, cervical cancer and high rates of childbirth mortalities.

There are those that argue that there are countries and places around the world where child marriages are accepted and practiced as part of the cultural values and traditions of a society and it would be wrong to pressure these societies to conform to western norms. For her part, Rowena adamantly opposes this view, arguing that almost every country has signed the International Convention on the Rights of the Child, which is not only the most comprehensive human rights treaty on children’s rights but is the most widely ratified treaty among nations in the world. In fact, the one notable exception is United States, so it would be wrong to assert the claim that the rights of a child or the elimination of child marriages is a Western idea.

This international treaty, Rowena points out, clearly defines childhood from birth to 18 years and clearly states that there should be no marriages under the age of 18. Subsequently in many of the countries where UNICEF is working to confront the problem, child marriages are actually illegal.

Unfortunately, Rowena concedes that the practice continues especially in rural and isolated places and in areas where the law is less enforced and cultural traditions override legislation, as well as in places where jurisdictions permit child marriages with parental consent. The fact is, says Rowena, that in many of these places, girls are many times not as valued as much as boys, and for a variety of reasons such as lack of birth certificates, poverty, and lack of education the problem of child marriages persists. UNICEF tries to work with women in these areas because they have lived experience and understand the psychological and physical development issues involved. Many of these women know that girls who marry as children face separation from family and friends during a critical stage of their lives and are expected to take on the role of a grown woman before they are ready-keeping house and raising a family.

Although child marriage is found in almost every region of the world including Canada and United States – overwhelmingly, child brides come from the world’s most impoverished nations. Child marriages is most common in Southeast Asia (notably India and Bangladesh) and sub-Saharan Africa (Mali, Chad and Congo), in regions linked with low levels of economic development and where girls (and women) are seen as financial burdens to their families and can be married off for financial gain or to strengthen ties between families or communities.

All around the world, millions of women and girls are denied their basic human rights, simply because of their gender. And yet, studies show that when you invest in girls, the whole world benefits. Its proven time and again that when a girl has enough to eat, a safe environment and an education, she’ll work to raise the standard of living for herself, her family and her community. Isn’t it time we put an end to child marriages? Rowena Pinto of UNICEF Canada definitely thinks so!!!